Mike Hariaczyi, Sensei / Instructor (3rd degree) started in 2009 at Apex after relocating from Buffalo and began his training under Shihan McLaughlin receiving his black belt in 2014. Having a background in finance and a keen ability to seek out new knowledge he brings a keen analytical mind to instruction and leads our online classes including online self defense sessions.

Ben Smyth, Sensei / Senior Instructor (5th degree black belt) began his training in 1997 under Sensei Patrice Castanza before his family relocated from Buffalo to Charlotte in 1999. Shortly after arriving in the queen city he continued his training under Shihan McLaughlin. He received his shodan (1st degree) in 2007 and continued his path and now runs our beginner students program.

Message to our students - "Be strong and courageous, never give up"

Our instructors are "Homegrown", meaning that they received their martial arts training, their black belts and their instructor training through Apex. We never hire or contract out to unknown third parties with the most junior of our instructors having over 10 years of martials arts training. Instructors receive robust instruction in the best methods in order to provide a safe and effective training experience for our students. 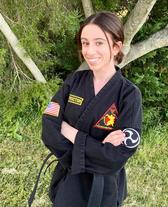 Stephanie Esper, Sensei / Instructor (3rd degree) started training in 2006 shortly after relocating from the Cleveland, Ohio area. Never letting any challenged hold her back she reached her black belt in 2011 and now helps lead our online classes. 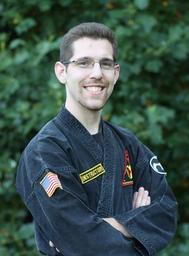 Caroline Al-Khalil, Sensei / Instructor (3rd degree) is a student at UNCC in Sociology and social work and started training at the age of 10 at Apex. She is instrumental in running intro sessions with new students and a leader with women's training efforts.

Master McLaughlin or Shihan, began training in 1986 while in high school under the late Grandmaster "Soke" Gary Castanza. Born & raised in the Buffalo area of Western New York he relocated to Charlotte in 1999 he continued training in Isshinryu karate under Grandmaster Mitch Kobylanski. In 2007 he began studying escrima under the late Guru Scott Shields adding to the base of filipino martial arts acquired from Modern Arnis under Grandmaster Castanza. In 2010 Shihan McLaughlin began training in Shurite jujutsu under Kyoshi Troy Price. The message to our students - "There is no finish line, but rather milestones and changes in the course of our journey." 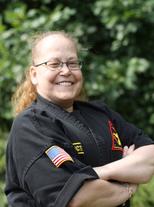 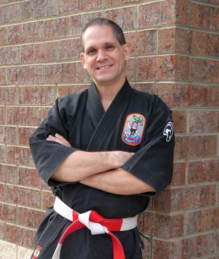